Words and photos by Jenny Barnes with quotes from Mark Langley

John’s mare is leaving tomorrow to go back to her owner tomorrow. Her education here is nearly finished – Mark has got her to the stage where he deems her safe and competent enough for her owner to carry on with. Mark has spent the last few rides on her outside, spending time cantering her on the last few rides. And he has been rugging her the last couple of days, which is going to help with today’s lesson – getting shoes on. 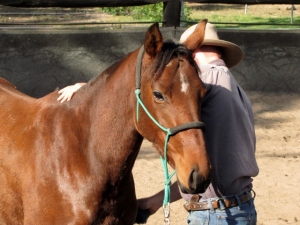 Pauline comes in to the round yard to help clean it – Mark is about to use John’s mare for a training video on turning on the hindquarter (if you want to see this, make sure you are signed up soon to get our free newsletters and the video link will come straight to you). She seems little fussed by Pauline. This is important – as you will see later. John’s mare seems and quiet around Mark…but she is a particular mare….

Mark warms her up to some exercises before the filming starts. 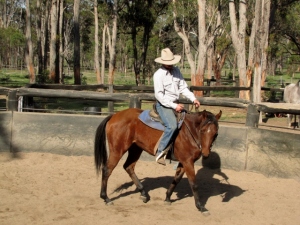 With the video taken (and she did brilliantly), Mark unsaddles her and asks Pauline to go back into the roundyard to catch her. Mark likes someone else to have handled and ridden his newly started horses before they go  back to their owners. He knows John’s mare will be weary but we didn’t expect an all out refusal! Look at this!

She not only clearly flattens her ears but she nods her head up and down enormously before turning away from Pauline. There is no way she wants Pauline near her. So this is just a reminder of what Mark has been working with – she looks soft and calm in the photo’s now – but Mark has won her trust and friendship and underneath, she will always be a strong minded mare.

“70-80% of un-handled horses generally accept a new person fairly quickly after being started. She fits into the small category. It will take a little bit of adjusting.”

Mark goes in and demonstrates what Pauline needs to do.

“I was showing Pauline that where she stands and holds her hands are important for her safety.”

Mark decides to trim her in the round yard, which she is familiar with. 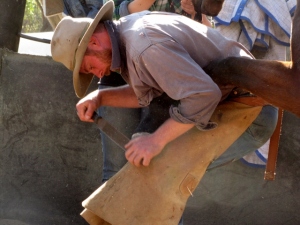 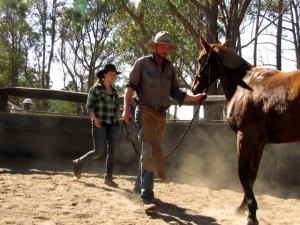 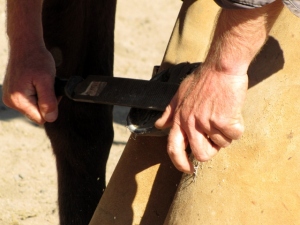 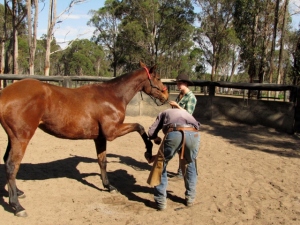 Then he takes her outside, to shape and put on her two front shoes. 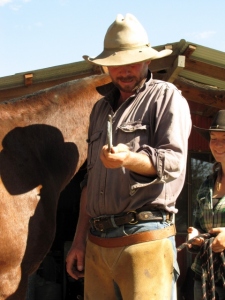 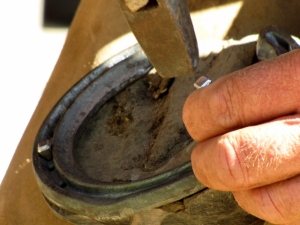 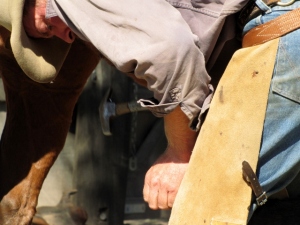 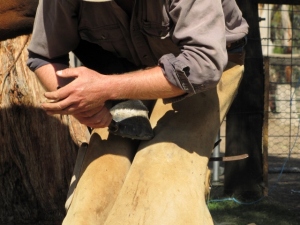 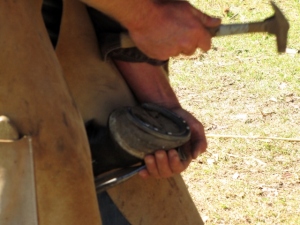 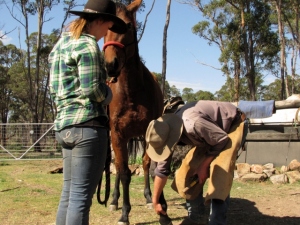 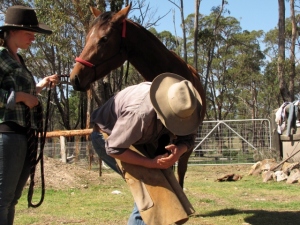 Mark works efficiently, and the mare gives little argument. She is uncomfortable at the end when Mark has to place himself under her chin to finish off. “Horses don’t like you under there – its a blind spot. That’s why it’s never safe to go under a horse’s rope that you don’t know. Always safer to go around their hind.”

Mark leads her back to the round yard to work on getting her hind feet picked up for tomorrow. She moves a little, then stands for him. 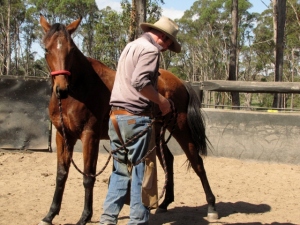 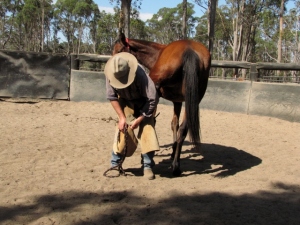 Mark will ride her out again this afternoon, and then tomorrow will be her last day with us. I’ll try to put as much detail into the stage that she is at for you tomorrow so you can really get an idea of how far she has come.

One thought on “Shoeing John’s mare”