Words and photos by Jenny Barnes with quotes from Mark Langley.

John’s mare has finished her education with us now. She left today, with her owner.  Her confidence and aggressive character was clear from the start – she bucked pretty hard with the saddle and it was a photo with her hooves higher than the rails of round yard that prompted us to follow her through this blog, giving you an insight into how Mark handles an unusual sort of horse and how she has developed in her understanding and trust of people, especially Mark.

We’ve seen how she has gone from not letting Mark touch her down the sides at all, to accepting a rug. We’ve watched how she has learnt to lead, to give to pressure, to take the bit, be fully shod, taken a stock whip, opened gates, ridden out on the property, float loaded, and even used as a demonstration for a training video on how to turn on the hind quarters (you can also see this once you sign up to Mark’s free horse training tips here).  Pauline even rode her today.

Now, after so many milestones have been reached, John’s mare is ready to go back to her owner.  She has had just 12 rides out on the property.

Here are the results of Mark’s efforts, time, patience and amazing understanding: 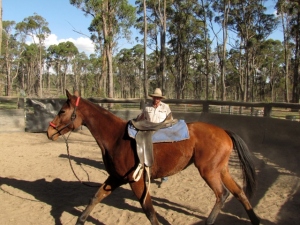 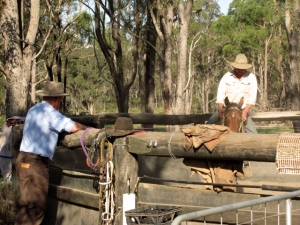 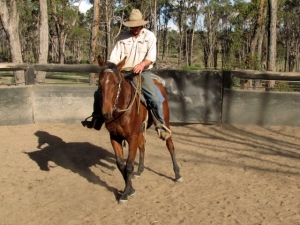 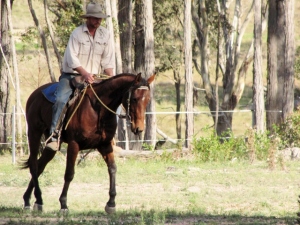 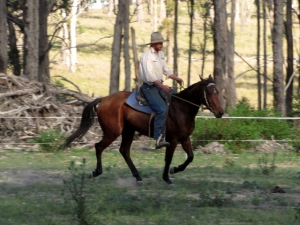 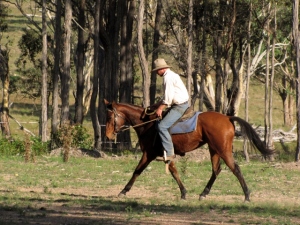 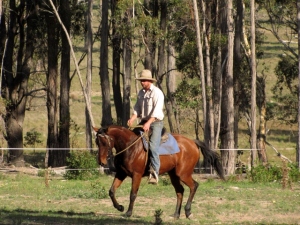 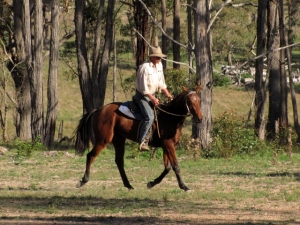 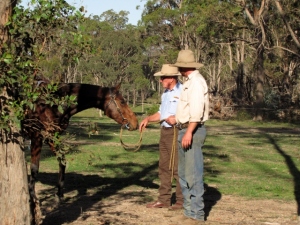 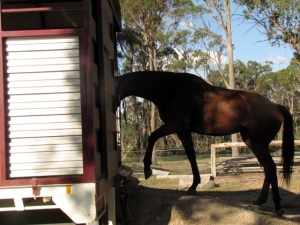 Need I say there was not a moment’s hesitation going on the truck.  With time and work Mark is sure that she will make a super horse. “I haven’t ironed out all of her issues but I hope I have ironed out at least half of them.

“It was sad to see this mare leave. It is these types of horses that draw the most out of me.  There was quite a long time building trust, and even when I started riding her, for quite a few rides all I was doing was trying to get her to relax and only giving her the basic jobs that were planting seeds to her foundation.  It wasn’t until the last 5 rides that this mare started to accept my ideas and go with them in a more relaxed way. All of a sudden she was going with pressure and calming to it.  When this happened, she was picking up things in a far superior way than some easy going horses do over a longer period of time. When I started moving her hips under saddle more, there were certain areas (especially near her rib cage) that caused her a lot of aggravation and tension.  She would round out her back and push her hip up into the pressure and her head would brace in search of an escape.  Then all of a sudden, after some chipping away, finding the right moments when she was centred to move her hindquarter, she freed up and moved her hindquarter in a soft and calm fashion that I would not have expected from her for some time. She even managed to keep her tail still whilst moving her hips.  She also showed natural ability to work on her hindquarter and was very good at opening her shoulders up.

She even started to read my seat when I asked her to move sideways.  When I took my centre sideways she started to pick up on it without needing my leg to help.

This mare could handle steady miles, general day to day poke-around-cattle work.  She is intelligent and quite talented but this ability shouldn’t be flaunted with. I believe that if she was now pushed hard without appropriate time out, she could sour and quite easily become resentful.

She has a lovely soft side. I am pleased that I have been able to see it. “

We’d love to hear your comments on this blog on our facebook page.

I have added the links to the previous blogs here if you want to recap:

Eighth blog After 10 days off: https://marklangleyblog.com/2014/03/07/following-johns-mare-being-started-blog-8-back-in-work-after-10-days-off/