Words & photos by Jenny Barnes with quotes from Mark Langley 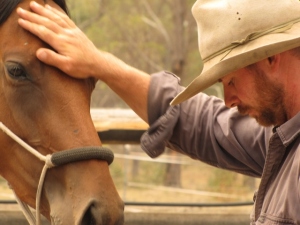 This time not only was John’s mare attentive and trusting towards Mark, she was also learning. As you will see through the photo’s, her ability to respond calmly and correctly to what Mark was asking enabled him to go one step further – to introduce the saddle.  Her response was expected – she did buck – but actually only a little.   The mare that was looking for a way out only 2 days ago, was now looking towards Mark.

Mark started by going through the steps he had previously worked through – the lunge stick, the flag stick and this time also the whip. 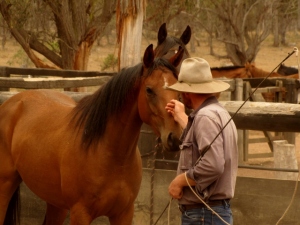 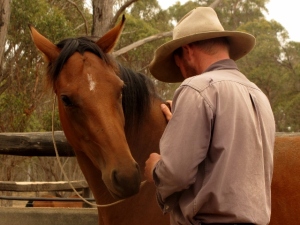 She is responsive now – and also soft. Mark is so careful to work on that right from the start. And they respond so well.  No-one wants to see a horse nervous, or in a lather of sweat. Look at her here above, she is inquisitive and willing. Ready to start learning.

As Mark introduces the whip to her for the first time, she stands remarkably still. He cracks it beside her, and flicks it over her, around her back and legs. She doesn’t flinch, standing still and calm. 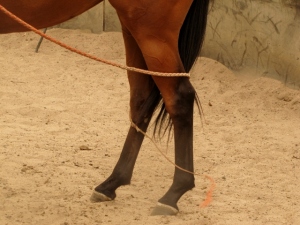 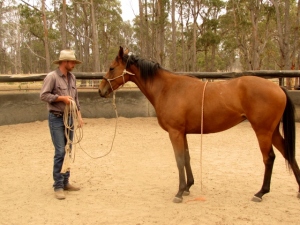 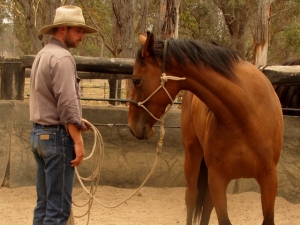 It is when she is still that she is attentive to Mark. So what will she be like once he starts moving again?

She does it. She keeps her steed as Mark wants it and stays focused on him, already starting to lunge. Everything takes time. One step, then another. Then a pause. 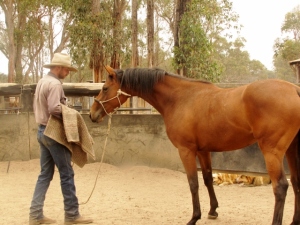 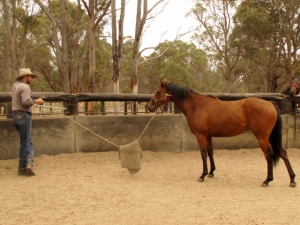 Next comes the saddle cloth. She has to accept the feeling of it falling off her and the visual sight of something landing unexpectedly near her. Everything is preparation for when Mark rides her. If he or his saddle was slip off her, he wants her to understand it. 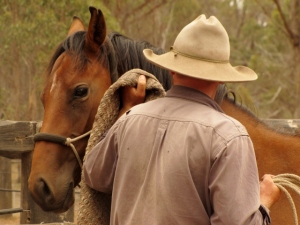 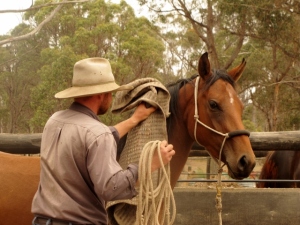 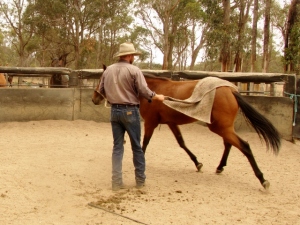 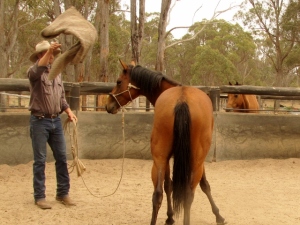 Each time Mark goes back to rubbing her down, she lets him a little closer in. This is great.

Now a new pressure – around her girth. 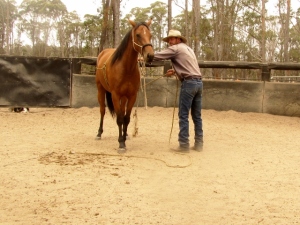 Next, Mark introduces the saddle blanket and saddle. The saddle Mark uses is an old western saddle that can fall on the ground without offending anyone. It’s light and easy for Mark to place. Just like the cloth, he is careful to let her see it fall a few times and watches her reaction.

Then it is fastened. “Before sending her out on the lead on her own, I made sure that she can lead and follow me around at a walk comfortably.” She seems fine with it on her ‘good’ eye…. 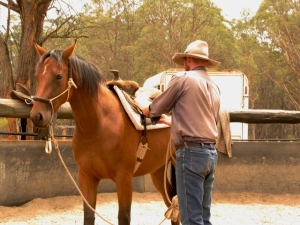 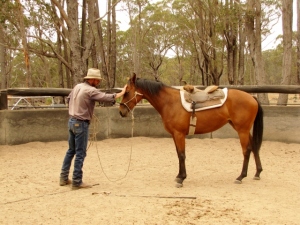 ….then she is asked to go the other way, putting Mark on her ‘bad’ eye. 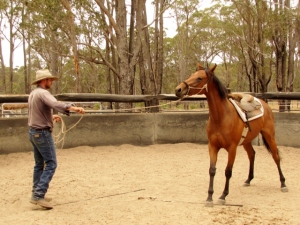 She’s not so good this eye…!

Mark pulls her in, bringing her attention back to him, as he asks her to go back on her good side and get her confidence again.

When she settles, the ‘bad’ eye is better already. So, a check on the girth, and a repeat, though this time without the bucks.  Her ability to move on from bucking and accept the saddle surprised me – I thought she may have more determination in her. Perhaps though, this is an indication of her intelligence. 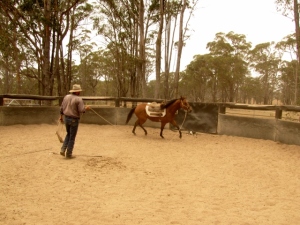 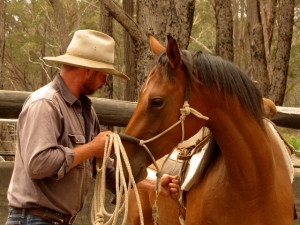 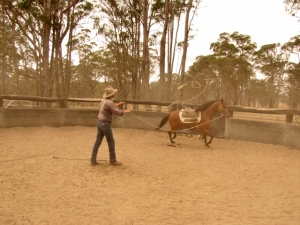 Although having a strong, confident mare is not unusual or difficult; this mare also has a tendency to switch off Mark and want to be somewhere else, clearly ignoring him as she does. This can be quite dangerous, and especially when you are training a young horse. Mark has to make sure that she will understand the signals he will teach her now that he may have use on her mentally back to bring her back to him. When our horses that roam free on our 500 acres come up to the yards, they catch her attention and give Mark the chance to start this right away.  Look at her ignoring him asking her to bend and focus. It takes a several tries before she comes back to Mark, but that is all he needs once she does, and her lesson ends. 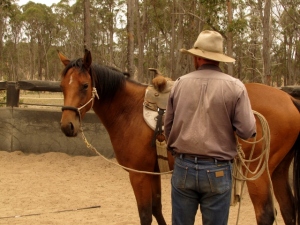 One thought on “Following John’s mare iii: Introducing the Saddle”